In his intervention at the fourth edition of the World Youth Forum, Abou El-Enein calls for establishing “Energy Homelands,” as the world should be aware that the energy crisis could turn into a geopolitical dilemma.

He indicated that the forum discussed important issues facing the world in light of the Coronavirus pandemic.

Abou El-Enein praised the great efforts made by President Abdel Fattah El- Sisi during the forum, in which 7,000 young people from 197 countries around the world came to Egypt to participate in the forum.

Abou El-Enein added during the “Energy Paths” session that the next trend should be towards a safer future, especially since the forum discussed during the first day the repercussions of the Corona pandemic and its impact on the future.

In the plenary session held last Tuesday, the forum discussed the issue of climate change in the presence of President Abdel Fattah El-Sisi.

Abou El-Enein pointed out that the overlap of the three issues “the pandemic, climate change, and energy” has become very complex, and from here the biggest global challenge facing the world has begun, so the most important question is how do we get out of this impasse?

He revealed that last year witnessed the highest rate of environmental pollution in history, due to reliance on unclean fossil fuels.

The lawmaker stressed that this happened because of the major industrialized countries that cause 80% of emissions and climate change.

He pointed out that developed countries were affected by their industry, agriculture, services, and supply chains, which increased pressure on governments and raised the cost of using electricity.

Due to the gap between supply and demand, Abul El-Enein said that the countries of the whole world are trying to compensate for their energy use through several methods.

He indicated that in light of scientific and technological progress, the world has tried to turn to clean renewable energy, but with the advent of the harsh winter, the demand for fossil fuel energy has increased again.

Abou El-Enein explained that Egypt was able to diversify its uses between different energy sources, and its policy succeeded in incompatibility between renewable and regular energy, as the percentage of dependence on renewable energy reached about 20%, but in 2035 this percentage will reach 45%, which is an achievement that enhances more dependence on clean energy over the period to come, while Egypt is going on other tracks and major projects that will double those percentages.

Parliament Deputy Speaker added that “Egypt is in a blessing” with regard to the energy crisis, especially after the recent gas discoveries.

He stressed that the main point in the energy file in Egypt is natural gas, which has defined for Egypt its relations and borders with neighboring countries, so we are able to know our economic and political rights and borders.

The new discoveries of natural gas encourage Egypt to put them on the investment market, and Egypt has turned into an energy center in the region.

Moreover, Abou El-Enein confirmed that Egypt has already managed to attract huge investments, the benefits of which are reflected in the local market and the entire region.

He added that the energy crisis can be measured through its impact on inflation, which reached 5% in Europe and America, and the supply chains that were greatly affected and affected the prices of services and products.

Abou El-Enein explained that the issue of energy is becoming global and worries everyone, and the world should not stand idle in front of it and talk about theories without looking at the reality.

He warned that the issue has become complex between climate change and its requirements, energy, and its crises, as well as the pandemic and the precautionary measures it imposes.

Abou El-Enein said that the whole world hopes to be self-sufficient in renewable energy, but countries face technological and financial problems, and international initiatives are necessary to find solutions to these problems.

He added that Africa alone can become the storehouse of renewable energy to supply the whole world as the continent possesses solar energy estimated at 4,000 solar hours per year; an advantage that only African countries possess and through which large quantities of energy can be generated.

Abou El-Enein praised the “Benban” Solar Park in southern Egypt and other solar energy projects in Tunisia, Ghana, and other countries.

He stressed that the world should conduct a global feasibility study for Africa to discuss the maximum benefit from its capabilities.

Abou El-Enein revealed that the world needs to spend $4 trillion annually on renewable energy to reach zero emissions from fossil fuel use.

Abou El-Enein made it clear that international banks around the world have funds available to them worth $200 trillion, in addition to the rest of the international marketing institutions that undertake studies in this regard, so they must be in the midst of the energy crisis in the world and carry out studies and fund projects that can be implemented in countries and direct support to them to achieve quick results and solutions.

Abou El-Enein said that in Egypt when we were able to diversify energy sources, we had come a long way towards finding a solution to the crisis because economic studies indicate that if the world continues to run at this rate, we will reach 2050 with a dependence on fossil fuels of 70% instead of 80%, which is a very small percentage with the escalation of global warming and ozone problems due to pollution.

Parliament Deputy Speaker warned that the energy crisis may develop into a geopolitical crisis because it is related to the issue of food, which is a security issue in the first place, and some wars have taken place because of oil wells.

He went on to say that energy security means protection with energy at a fair price with the requirements of climate preservation alongside its use.

These steps include a gradual and cautious transition towards relying on renewable energy; localizing wind and solar energy; increasing investments in renewable energy; having special programs to finance clean energy projects; disseminating successful experiences in electrical interconnection and renewable energy; and developing research and innovations about green hydrogen, which is the future of energy in the world.

He said that the whole world must follow specific studies to gradually transition to reliance on renewable energy and to localize wind, sun, and clean energy, and Africa is highly likely to play a role in this.

Abou El-Enein stressed that the issue of funding is very important and there must be commitments to the financing figures.

He called for establishing a financial observatory to inform countries of their obligations and what is required of them in this file.

He suggested that the world needs an international entity that starts making new feasibility studies in a new style and identifies steps to solve the crisis.

In addition, the lawmaker affirmed that the world should seek to achieve a new dream related to energy homelands, and there must be a responsible party in the world that plans to market projects and solutions to achieve the best possible results.

Dr. Mohamed Shaker, Minister of Electricity and Renewable Energy, and Rana Ghoneim, Head of Energy Systems and Infrastructure Division at the United Nations Industrial Development Organization (UNIDO), participated in the symposium on “Energy Paths Orientation towards a Safer Future.” 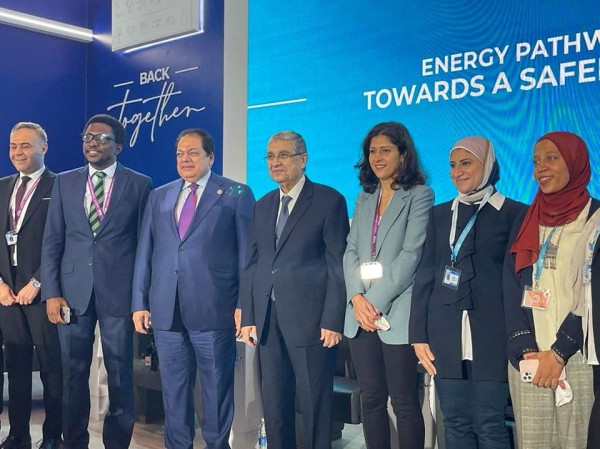 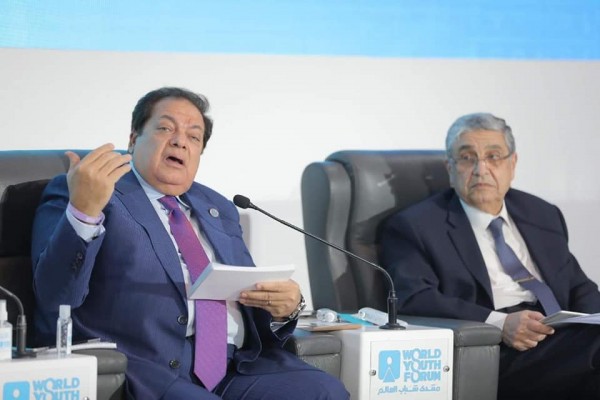 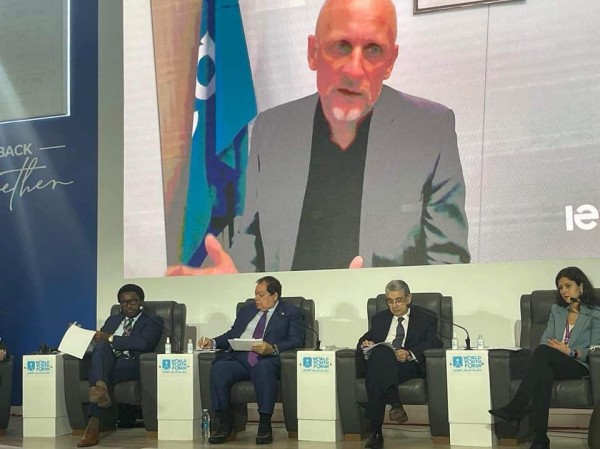 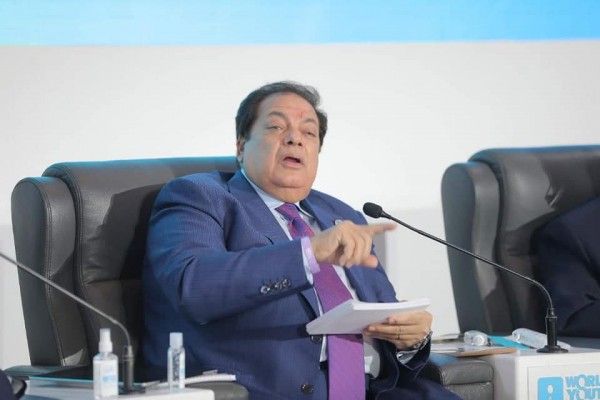 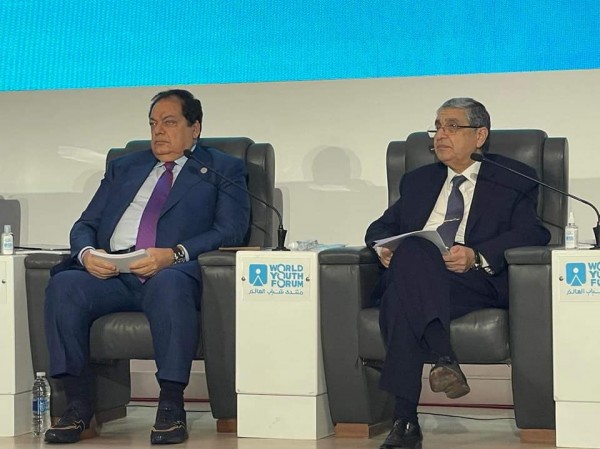 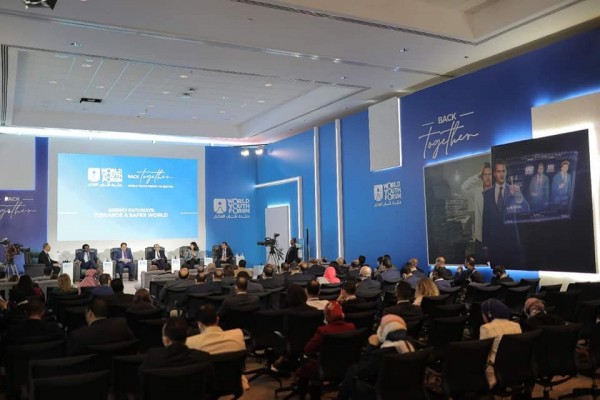