Home » News » Abou El-Enein winning of “THE BEST INDUSTRIALIST AWARD IN AFRICA” is a message to all Egyptian industrialists: MP

Abou El-Enein winning of “THE BEST INDUSTRIALIST AWARD IN AFRICA” is a message to all Egyptian industrialists: MP 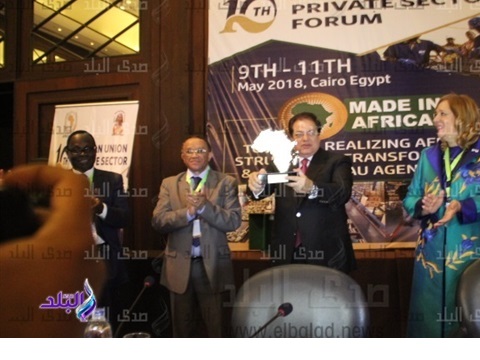 MP، Majed Abul Khair، deputy of the parliament’s African Affairs Committee congratulated on Thursday Prominent Businessman، Mohammed Abul Enein، Chairman of Ceramica Cleopatra Group، on winning “THE BEST INDUSTRIALIST AWARD IN AFRICA”.
In press statements to “Sada ElBalad” news website، Abul Khair noted that Abul Enein wining of this award is a message to all Egyptian industrialists، on the necessity to intensify their presence in the African content.
“Africa is of a strategic nature، thus we need the Egyptian Businessmen interaction to secure the Egypt’s interests in Africa، and to deal with the African continent countries at the level of Trade and industry”، Abul Khair added.
Noteworthy، The 10th African Union (AU) private sector forum honored on Wednesday the prominent Businessman، Mohammed Abul Enein، the honorary speaker of Euro-Mediterranean parliament by granting him “Proudly Made in Africa” award.
“It is an honor to grant “Proudly Made in Africa” award this year to Ceramica Cleopatra Group، The leading Egyptian manufacturer of ceramics، porcelain and sanitary ware، which has succeeded in creating a global brand for Africa in this industry”، the AU commissioner for economic affairs، Victor Harison said.
Moreover، Victor hailed Egyptian Businessman، Mohammed Abul Enein experience saying” it embodies the real spirit of this award and its noble targets”.
He pointed out that the establishment of Ceramica Cleopatra group aimed at settling a new industry in Egypt and Africa، rather than relying on imports.
“Ceramica Cleopatra group has also gained a strong reputation in the local and international markets، surpassing the world’s oldest manufacturers، relying on technology، innovation، and product excellence”، Victor added.
The forum displayed a short film on “Ceramica Cleopatra” group successes and its innovation for modern factories from early 1990s until it becomes one of the world’s leading ceramic manufacturers، as well as the successes of Abul Enein in the tourism industry.
African Union (AU) organizers confirmed that this award is the first to be awarded by the AU to a businessman for his successes in various economic activities.
https://www.youtube.com/watch?v=HaYXkBgrGwk
https://www.youtube.com/watch?v=C4XDKDGPLqg
https://www.youtube.com/watch?v=2F_P_zCJNZU