Home » News » The Egyptian people and army protected Egypt from a plan to overturn the Egyptian government, we worked side by side with the president to deliver a clear vision of the actual situation to foreign countries

The Egyptian people and army protected Egypt from a plan to overturn the Egyptian government, we worked side by side with the president to deliver a clear vision of the actual situation to foreign countries 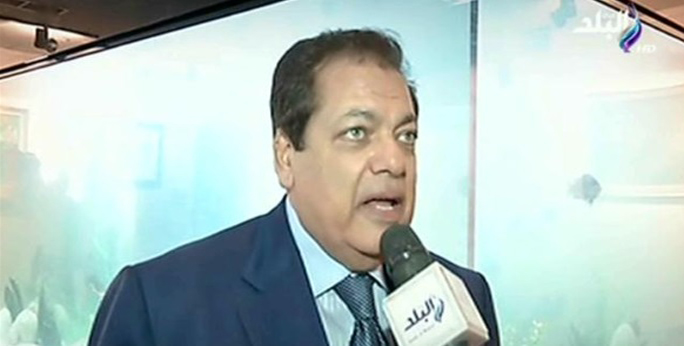 Mohamed Abou El Enein, president of “Sada El-Balad” media group. “Ala Masoulity” programme won the most popular TV show award, which was a proof of the popularity and patriotism of the programme.
I was sure that “Ala Masoulity programme was going to make it”. I am proud of everyone working in the channel with loyalty.
Sada El Balad supported the President in his foreign tour to deliver a clear vision of the actual situation in Egypt.
The Egyptian people and army protected Egypt from a plan set to overturn the Egyptian government with the target to make Egypt similar to other countries in the region.

There’s a lot of good news related to the Suez Canal this year.
We have to get ready for the economic conference next May, which has the objective to transform radically the way investments are attracted.
Mohamed Abu El Enein, businessman and chairman of Sada El Balad media network, congratulated Ahmed Moussa, TV anchor, and “Ala Masoulity” programme, which he presents on Sada El Balad TV channel, for ranking first in the report issued by “Absos” international corporation for the best “Talk show” in 2015.

Abu El Enein, during his call on Sada El-Balad channel, expressed his satisfaction with the team and he asked them to exert more efforts to maintain their success, in order for Sada El-Balad to be always a leading national channel serving the country.

Abu El Enein added “I’m proud of all the employees who work with great loyalty in the channel, I was also very pleased to hear of the success of “Ala Masoulity” programme winning the most popular programme award although I was sure that this was going to happen, because Egyptians admire every patriotic person and this is exactly what has created a connection between Sada El-Balad and its audience, and the proof of its popularity”.

He said that the channel and its employees played a patriotic role in covering the president’s tour in other countries, the president needs a strong media team to speak to the outside world, to stand by the president and to deliver its real image, and this is exactly what Sada El-Balad has done… as they made many interviews with Presidents and MPs of other countries”

He greeted the TV anchor Ahmed Moussa after Al Masoulity programme won the most popular award in Egypt and said “I am pleased of the efforts of Ahmed Mousa, he did great work and was scrupulous in his professional activity. Abou Elenein also praised the performance of the TV anchor Hamdy Rezk and his programme “Nazra”.
The President of Sada El-Balad media network, expressed his pride of the media message delivered by Sada El-Balad and said “I am proud of the media message delivered by Sada El-Balad in a clearly professional and honest way… the channel has no other policy than the country’s interest, we aren’t affiliated to any party and we don’t demand anything from anyone, all we hope for is Egypt’s advancement.

From the other side, he said that “Egyptians did great efforts and achieved massive advancements throughout the last year. Nevertheless, we must be providing more to people in the new year and must stand by the president. Highlighting that Egypt survived a plan set to suffer the same destiny of the other countries that are witnessing conflicts and killings but God protected Egypt with its people and army.
And concerning his hopes for the new year he said “I wish that bureaucracy will be eradicated as it obstructs investments… , to issue new encouraging laws and achieve massive projects”, he also hopes that Egypt will be able to eradicate terrorism in the coming year, facing challenges together and he is looking forward to having more national projects implemented in all economic and agricultural sectors.
Abou El Enein demanded the investors to get ready for the economic conference next May, which is intended to lead to a huge transformation to launch more projects and attract investments