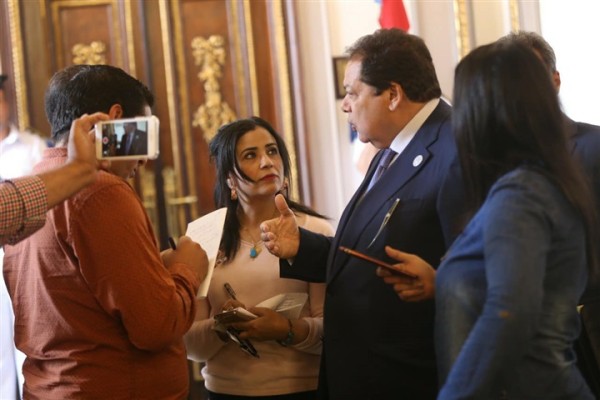 Honorary President of the Euro-Mediterranean Parliament and  Prominent Businessman Mohamed Abou El-Enein said that the international community should adopt a common position against terrorism.

In press statements to “Sada ElBalad” Satellite TV Channel, on the sidelines of the 14th Parliamentary Assembly of the Union for the Mediterranean, on “Combating terrorism in the Euro-Mediterranean region, Abou El-Enein noted that every country should review the sources and causes of terrorism, because they will vary from one state to another, and this difference will need ways to address.

Moreover, Abou El-Enein added that Egypt’s experience in dealing with terrorism should be taught. “Egypt will be announced free of terrorists soon”, Abou El-Enein stressed.

“Despite the harshness of Egypt’s experience in countering terrorism, yet it went in parallel with economic development operations”, adding “Egypt presented a unique experience which caught the attention of the whole world”.

Abou El-Enein said that the 5th Parliaments speakers Summit of the Parliamentary Assembly of the Union for the Mediterranean (PA-UfM), hosted by the Egyptian parliament, highlighted the countries’ suffering, as a result of terrorism and its disadvantages and problems at all levels.

In press statements, on the sidelines of the summit,

Abou El-Enein said that all the speakers talked about the negative effects they have suffered as a result of the criminal acts committed by terrorist groups, stressing on the need for programs implemented by the governments to confront terrorist acts and to defeat terrorism.

Moreover, Abou El-Enein noted that The United Nations (UN) should adopt a common position and a good strategy to confront such criminal acts which threaten the whole world.

“I wish if we presented Egypt’s experience in fighting terrorism in Sinai during this summit”, Abou El-Enein added, affirming that the Armed forces in cooperation with police officers managed to eliminate terrorism, in parallel with achieving the comprehensive economic development not only in Sinai, but across all the republic as well.

Abou El-Enein pointed out that the state gives a great interest to youth, to support and protect them from extremism, and terrorism, through the youth conferences, and job opportunities offered to them.

“Al-Azhar played a vital role in fighting terrorism”, Abou El-Enein affirmed, noting that those terrorist entities have nothing to do with religion.

Additionally, Abou El-Enein stressed on the need to consolidate the principles of citizenship and the national state in order to overcome the political vacuum created in many countries such as Syria, Libya and Yemen, which resulted in the rise and expansion of terrorist groups