Home » News » Abou El-Enein : Egypt Plays a Leading Role in the Face of Extremism and Terrorism

Abou El-Enein : Egypt Plays a Leading Role in the Face of Extremism and Terrorism 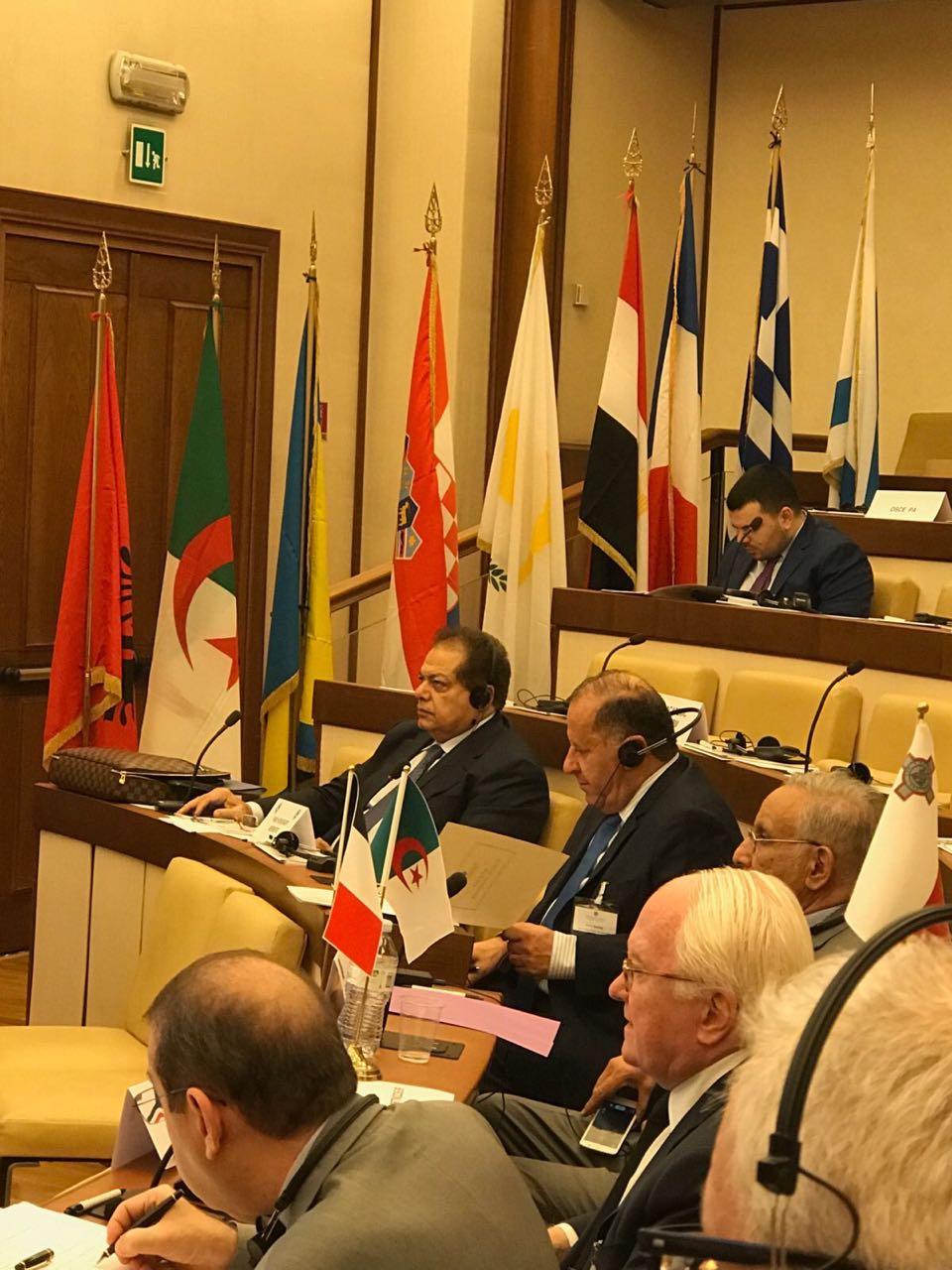 In his Speech to the Parliamentary Assembly of the Mediterranean (PAM), Abou El-Enein: Egypt Plays a Leading Role in the Face of Extremism and Terrorism

Mr. Mohamed Abou El-Enein, the Honorary President of Parliamentary Assembly of the Mediterranean (PAM), stressed that terrorism is the main threat to global security. We cannot address terrorism without addressing the intellectual radicalization leading to it, especially in light of the new wave of terrorist movements that use the Internet in spreading their ideologies, recruiting new elements, transferring information and attracting money, as well as planning, coordination and implementation of their operations. Risks of “Lone Wolf Terrorist” increased.

He added that Egypt, under the leadership of President Abdel Fattah El-Sisi, is playing a leading role in countering terrorism and extremism, defending its own security and the security of the region and the world. He praised the heroic role played by the armed forces and civilian policemen and their sacrifices in defending the Egyptian people.

This came during a speech by Mr. Mohamed Abou El-Enein in PAM high-level meeting dedicated to: “Dialogue in the Encounter between Cultures and Religions: The Role of Politics and Education”. The meeting was held at the headquarters of the Italian Senate, headed by Moroccan MP Al-Husseini Al-marbouh, speaker of the Moroccan Parliament, and the participation of Paulo Jantelaun, Italy’s foreign minister, Ahmed Al-Tawfik, Minister of Awqaf and Islamic Affairs in Morocco and French Cardinal Jean-Louis Tauran, president of the Pontifical Council for Interreligious Dialogue, as well as parliamentary delegations representing 26 parliaments of the Mediterranean countries.

The Parliamentary Assembly of the Mediterranean strongly condemned the brutal terrorist attack on Petrine Church (El-Botroseya Church) in Cairo last Sunday, which killed innocent Egyptian citizens during their prayers.

With the participation of Mohamed Abou El-Enein, the Assembly extended its sincere condolences to the families of the victims and the Egyptian President, people and government, and wishes a speedy recovery for the injured.

The Assembly stressed its condemnation to all terrorist acts rejected by all religions, and expresses its full solidarity with Egypt and all the countries confronting terrorism, which has become the main threat to international peace and security.

The Assembly praised the swift security actions taken by the Egyptian authorities and their success within hours to uncover the perpetrators and bring them to justice.

In his speech, Abou El-Enein said that the security treatment is not sufficient on its own to eliminate terrorism, especially in the medium and long terms. We must address the causes that lead to extremism, as well as facing the erroneous ideas that make some individuals attracted to violent extremist groups.

He added that terrorism in its essence has different ideas and visions to the world based on distorting the religious beliefs, in order to legitimize to justify its crimes, recruit followers and spread sedition, hatred and polarization within our communities.

Renewal of the Religious Discourse:

Abou El-Enein presented President El-Sisi’s call to Al-Azhar Institution, as the religious authority of Muslims in the world and a beacon of moderate Islam, to take serious steps to renew the religious discourse to be consistent to spirit and requirements of the modern era, as well as explaining the real concept of Islam that is based on tolerance and compassion, and reject what is hostile to reason and humanity, as well as addressing extremist ideology of groups practicing violence, murder and sabotage.

Abou El-Enein stressed that Al-Azhar institution plays a leading role on both global and domestic levels to spread the correct message of Islam, through training of preachers and imams from various countries around the world. In addition, Al-Azhar and Dar al-Ifta established a global electronic observatory to address lies of extremist groups using 8 international languages.

He added that Al-Azhar held a “Global Conference to Counter Extremism and Terrorism” as it announced that extremist groups do not represent Islam, and condemned crimes, murder and sabotage committed by these groups.

Honorary President of the Parliamentary Assembly of the Mediterranean stressed that the all of President El-Sisi for the renewal of religious discourse and the interaction of Al-Azhar with it represents a pioneering experience that deserves to be taught and disseminated. We should build on the achieved progress, and support this experience in order to win the war against extremism and terrorism. Voices of major Islamic institutions like Al-Azhar are certainly the most influential voices in the war against extremism and terrorism, as they immune to vulnerable groups against the risk of extremist ideology.

He added that religious institutions, together with educational institutions, media and intellectuals have a vital role in addressing radicalism. They should be a major part of the international coalition to counter extremism and terrorism. We must work to create a partnership between these institutions, information technology corporates and the media in order to give them an effective platform for spreading the correct understanding of religion and providing values of tolerance, moderation and acceptance of others.
Addressing Islamophobia and Rejecting the Attack on Islam:
Abou El-Enein warned of the danger that some people take terrorist attacks as a pretext for attacking Islam, which is heavenly religion and more than 1.5 billion Muslims around the world are proud to belong to it, as well as provoking fear and hatred against Muslims and presenting a negative image of them. This is far from the essence of Islam, which is a call for peace and compassion for all human beings and not just for Muslims.

He also called for addressing the Islamophobia phenomenon, which contribute to the spread of extremist ideas and stimulate Muslim minorities’ young people in some Western countries to join extremist groups.

He added that the attack on Islam portrays the war on extremism as a war on Islam. It provides support for extremists and portrays them as defenders of Islam and Muslims, which is not true, as the vast majority of their victims are Muslims.

He called the United Nations and parliaments to issue resolutions and legislation banning the defamation of religions, prophets and apostles, and not to take advantage of the freedom of opinion and expression as a means of inciting hatred.

Closing the Websites that Promote Terrorism:

Abou El-Enein confirmed that freedom of opinion and expression is respected, but the international community should address the use of the Internet and social networking by extremist organizations to spread their ideologies and recruit their members, as well as coordinating, planning and carrying out their attacks.

He called the international community, governments and Internet companies to criminalize, delete and restrict access to websites and accounts inciting hatred and violence through the Internet.

He called to on France to follow the example of France. On November 13, 2014, France issued an Act allowing the administrative authorities to ask Internet service providers to block access to websites registered in France that calls for terrorism.

Abou El-Enein asked the developed countries to increase financial resources directed to fight extremism and terrorism to build countries’ capacity to counter terrorism, and to tackle poverty, unemployment, lack of opportunities and the low living standards, which provide a fertile ground for the growth of tension and alienation that make some individuals more susceptible to the calls of extremism and violence.

He pointed out that the United States has spent on the war in Iraq and Afghanistan more than a trillion dollars, and the Middle East lost more than $ 12 trillion dollars due to the continuing Arab-Israeli conflict, not to mention the enormous economic losses due to civil wars and terrorism in the region.

He wondered What if the international community spent a half or a third of these resources on achieving peace in the Middle East and supporting the provision of jobs, good education and decent life for young people seeking a better future, in a region more than two-thirds of its population are youth?

Abou El-Enein stressed that facing violent extremism will not be effective without addressing the political crises that feed it, particularly the resolution of conflicts in Syria and Palestine, as well as supporting the government’s efforts in Libya, Yemen and Iraq to counter extremist groups.

He wondered what do we expect from Syrian children and youth after their lives and their country have been destroyed? And what we expect from a Palestinian Israeli conflict continued for more than 60 years other than more frustration and anger among Palestinians and disappointment among Israelis? The continuation of this conflict and occupation without a solution will strengthen the extremists and weaken the moderates on both sides.

Integration of Young People in the Political Life:

Abou El-Enein referred to an Egyptian experience, where President El-Sisi held a three-day Conference with more than 1500 young people from various sectors in order to build confidence between the state and youth. This step would contribute to making youth a main weapon to counter terrorism rather than to be targets to extremism.

He pointed out to the importance of this experience in clarifying that motivate and mobilize this generation of young people is conducive to strengthening the immunity of society towards extremism and terrorism.
Correcting the Mutual Images between Northern and Southern Mediterranean.
Abou El-Enein wondered how the society and peoples in the southern and northern Mediterranean countries see each other? Do school curriculums, media and movies present an honest picture both of us or stereotypes contrary to reality?

He added, how did the media in European countries dealt with the issue of refugees from Syria and Iraq? Have they been considered as victims of violence seeking safety or as a source of terrorist threat to European societies?

And how the media deals with terrorist acts committed by Muslim extremists? Are they presented as representatives of Islam or as a small group outside the overwhelming Muslim majority who love peace and regret violence?

He stressed that this is an important issue that needs a profound study, particularly at the moment, where voices of extremism increase and voices of moderation retract.

He called for educational curricula and the media to promote mutual understanding, tolerance and respect for diversity, privacy, as well as acknowledging that diversity is a source of wealth.

The Full Implementation of all UN Security Council Resolutions Addressing Extremism and Terrorism.
The Honorary President of the Parliamentary Assembly of the Mediterranean stressed the need for full implementation of Security Council resolutions, especially with regard to addressing the financing of terrorism and zero tolerance towards any country, organization or individual facilitating the formation of terrorist groups or supporting or providing them with funding, weapons or promotion.

He called the UN Security Council should act under its responsibilities and include all the groups involved in terrorist acts in the terrorism lists.