Abou El-Enein supports the Egyptian state in his own way:

– Obasanjo takes a tour in Cleopatra factory, the administrative capital and the national projects.

Honorary President of the Parliamentary Assembly of the Mediterranean said to Egypt’s guests:

– Egypt outperformed America in the speed of completion of electrical stations.

– President Sisi will lead Africa forward and open many files.

– Egypt and Africa should exploit the new thinking in the world to increase investments.

– President of Egypt is capable of doing too many things to lead the development in Africa.

Believing in Egypt’s national role as a soft power in Africa, businessman Mohamed Abou El-Enein, Chairman of the Supreme Advisory Council of the Arab Economic Council and Honorary President of the Parliamentary Assembly of the Mediterranean, received former Nigerian President Obasanjo, former Ethiopian Prime Minister Dessaline and a group of African dignitaries who participated in the Africa Forum held in Sharm el-Sheikh.

In order to open Egypt’s window to African countries, Abou El-Enein and former Nigerian President Obasanjo were escorted on an inspection tour of the road and tunnel network and power station in the new administrative capital.

Former President of Nigeria congratulated Abou El-Enein for his achievements in the field of ceramics, real estate, tourism and agriculture. 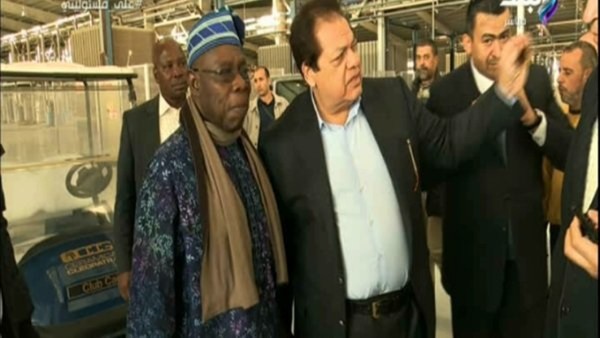 “I hope through my work in agriculture that we can work together not only here, but in Africa as a whole,” Obasanjo said.

He added, “Cleopatra factory that I saw today is unique not only in Africa but in the whole world. If it can export its products to all parts of the world, including Japan and the Japanese market, this factory must exist everywhere in Africa, not just its products, but its knowledge and experience that the factory brings can transfer to Africa as a whole. ”