Mohamed Abul-Enein in an interview with «Al-Ahram Al-Arabi»: The Dream needs Imagination

We have to realize that Africa is a big continent with many natural resources. It has 95% of the world’s diamond reserves, 90% of platinum reserves, 70% of the world’s gold, 33% of the world’s copper, 76% of cobalt, and a vast area. The Earth has enormous solar energy of about 4,000 solar hours per year.

Africa is also a young continent. Young people are the majority of its population, which means that they will have a great role in creativity compared to other continents. The continent with all its components is rich, so it has become coveted for all countries of the world.  Everyone wants and races to get raw materials for recycling and maximizing the added value.

One of the most important achievements of President El Sisi in the field of foreign policy is returning to Africa, which has been neglected for years. This negligence paid us dearly and deprived us of different achievements, but we should not think about the past and look to the future.

I have attended many meetings during which the President assured his full support for every step approaching Egypt from Africa. He held many meetings with Africans, and in the youth forum held recently in Sharm el-Sheikh attended by about 10,000 Africans, The President, despite the burdens placed on him, was keen to attend various meetings in several African countries. This effort will bear fruit in the near future.

This comes as Egypt leads the continent through the African Union for the third time, which paves the way for progress in all common areas, but there must be a system for the African dream with specific visions to develop a feasibility study. We have to discuss the most important problem for investment in the continent, namely transport. Some African countries have no sea access and this raises the cost. Consequently, there must be intermediate ports when we export our products to the continent.

There is a strategy based on mutual interests, and this needs political will. For example, many ideas put forward about the transport system. We are talking now about a longitudinal road links Alexandria to Cape Town, which, if implemented, it will make a qualitative leap in the continent.

The system should also entail the consolidation of the idea of ​​productive specialization, so that we can determine the appropriate activity for each region according to its resources and potential, Egypt should play this role and manage the system for the future of Africa and then map the executive visions of these visions.

There are agreements on the continent, including: the Sahel and the Sahara, COMESA, 5 + 5. But the continent needs there are unions and blocs in the south, although they are landlocked countries with no ports.

But the continent needs a different thought. As long as there are benefits for major countries, the struggle for gas, oil or uranium, which is rare in the world and used in nuclear industries, will continue. Here, we have to realize the biggest problem we face in the issue of competition, which is that our technology has not reached how to maximize value added, so we need to establish research centers and universities seriously.

The northern coast of the continent, for example, can make solar energy and export to Europe.

Businessmen have a great responsibility, first and foremost, how to create the market and find a place there for their products and services. We have a vivid and powerful example in the Arab Contractors Company that have been present in various African countries and have strengthened their relations with them through useful projects that made the company high credibility.

Our factories also achieved that credibility through our products we exported to various countries. I also provided them technology and sent many experts and technicians to the countries that asked us to.

As a factory owner, the African market has been important to us and we succeeded in finding agents and distributors within the continent and we are exporting to more than 22 African countries.

Certainly, we face transportation problems and this makes us always demand the existence of regular transport lines, especially in maritime transport because it is cheaper and shorter and this needs the support of States.

The coming period needs new insights based on the African market study. As industrialists, we should benefit from different experiences in different European and non-European countries.

The service sector has succeeded and there are other sectors that can succeed in Africa. Some Lebanese invest billions of US dollars in different African countries in the fields of diamonds and gold. We have expertise in gas and oil that can be exploited.

I think that e-commerce has not taken its luck so far, as the digital economy would strengthen Arab-Arab and Afro-Arab cooperation.

It is possible, such as export subsidies, to take a land and establish a permanent exhibition of Egyptian products, which is welcomed by all African countries.

Our choice of a country may feed the surrounding countries to be accompanied by artistic and cultural activities. This exhibition can be mobile and precede by a large media marketing process. It must be marketing good products and not treating the African market as a poor market to offer the worst products. 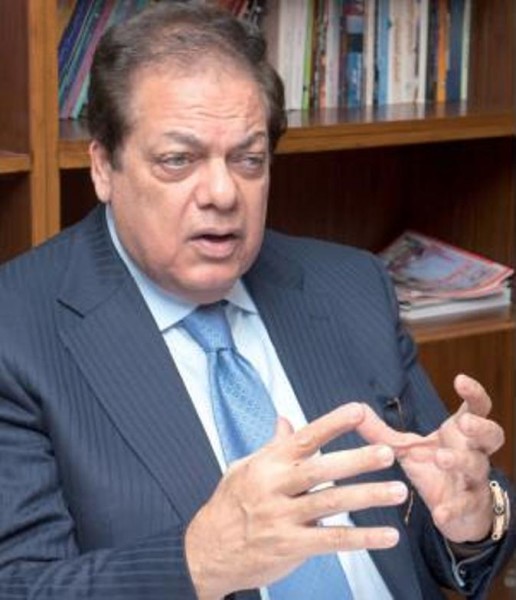 As investors we, need a stable market and we want to deal with credible entities.

I was the first to set up a factory in 10th of Ramadan City, then the first to go to Ain El-Sokhna and then East Owainat, where we made the decision to plant it. There was no road or train, but we accepted the challenge. I am happy to storm the desert to establish agricultural, industrial and tourism activities. It is true that I lost a lot in East Owainat, but I am glad that I contributed to the achievement of Egyptian food security.

When we talk about Africa, we have a problem: that the green product is cheap, and in order to establish an industry, the industry must be next to the place of agriculture. The cost of transportation increases the cost of investment a lot.

Last year, I met with more than 100 African media personalities to talk about this and the difficulties of implementing the idea, including that the people of the continent speak different languages as well as local dialects.

Thus, the establishment of a media system that addresses all of these groups requires government action in the first place followed by the intervention of the private sector.

I was delighted with the choice and felt that it was my duty to push the path of Arab cooperation through various actors.

According to the timetable for graduation in Arab-Arab cooperation, there was supposed to be a customs union which did not materialize for several reasons, including political circumstances, which led Syria, for example, to issue a decision to ban Egyptian ceramics, which is purely political.

Some other countries impede the flow of trade by various decisions such as fees and others. This hinders the Arab work system, and the intra-Arab trade is one-tenth of world trade.