The African Union: Abou Al-Enein’s pioneering experience in industry is a role model for the African private sector

Chairman of the COMESA Business Council: Cleopatra Group is a Pride for Egypt and Africa

This came at the 10th. African Union Forum for the Private Sector held today in the presence of Dr. Hala Al-Saeed, Minister of Planning and Administrative Reform.

Victor Harrison, Commissioner for Economic Affairs of the African Union, handed over the Award to Abou El-Enein in a big celebration attended by a large number of African business men and women. This is the first time for an Egyptian manufacturer to win this prestigious Award, which is awarded to Cleopatra Group among all companies in 55 African countries.

The Award Statement confirmed that Abou El-Enein’s pioneering experience in industry and desert reconstruction reflects the true spirit of the Award and its noble goals. The Statement pointed out that Abou Al-Enein succeeded in settling a modern industry in Africa rather than relying on imports. He created a new industrial brand name for Egypt and the Continent in the ceramics, porcelain and sanitary ware industry, which surpassed the world’s deep-rooted manufacturers.

The Statement added that Cleopatra’s success is based on the advancement of its technologies, the creativeness of its designs, the excellence of its products and its adherence to its values ​​towards customers, workers, society and the environment.

The African Union pointed out that the experience of Mohamed Abou El-Enein over the past 40 years is a role model for the private sector that we want to see in Africa. It added that Abou El-Enein is one of the pioneers of the reconstruction of the Egyptian desert with factories, farms, tourist destinations and high-tech and real estate projects, which led to job creation, training employment, securing food, technology localization, creating added value from local raw materials and opening up new markets for the Egyptian products.

Victor Harrison, Commissioner of the African Union for Economic Affairs, confirmed his happiness for the presence of international industries in Egypt. He pointed out that the African Union knows the global status reached by Cleopatra Group, adding that Abou El-Enein’s experience in investment and industry is a role model for the African private sector.

He also called on the Egyptian private sector to invest in Africa because Africa will be a big market in the future, praising the economic reforms witnessed in Egypt and the success of President El-Sisi in putting Egypt on the right track to economic growth.

Dr. Amani Asfour, Chairman of the COMESA Business Council, congratulated Egypt and the great industrialist Mohamed Abou El-Enein for winning the Best Industrialist Award in the African continent, pointing out that he gave a proud image to Egypt and Africa and contributed in opening up many markets to Egyptian products.

She added that Ceramica Cleopatra Group’s experience represents a symbol of Africa’s industrialization, achieving high value added from its raw materials and invading the global markets with its industrial products. She pointed out that this award is granted only to companies that invest heavily in research, development and innovation and deepening the industry that relies on African raw materials and managed by the the African people, as well as helping the surrounding communities and creating many jobs, with their products that carry the logo: “Proudly Made in Africa”.

For his part, Mohamed Abou El-Enein expressed his happiness to receive this prestigious Award, which is a precious medal on the chest of every manufacturer in Egypt and Africa.

He added that the success of Cleopatra Group is the result of the effort of 25 thousand employees and the state’s support for every serious investment, as well as the confidence of our great Egyptian people in our products, was the passport of transit to the world markets.

Abou El-Enein explained his experience in the field of industry and reconstruction of the desert, which he started in 1979 by invading the 10th. of Ramadan Desert and establishing the first Cleopatra Group’s factories there, which was the first modern ceramic factory in Egypt and the Middle East.

The group then became the first in the Middle East and the 4th. largest companies in the world. Its products invade all continents of the world, including the Japanese market, the most difficult global markets. 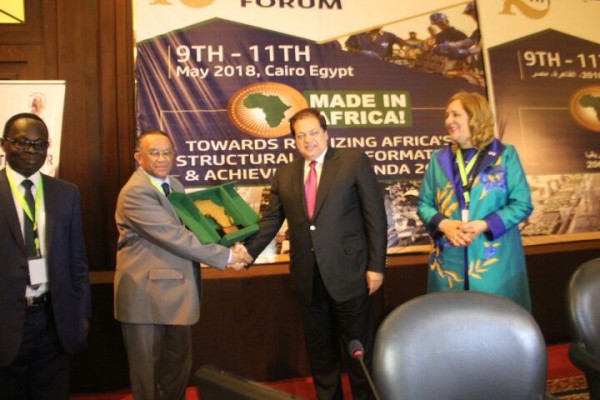 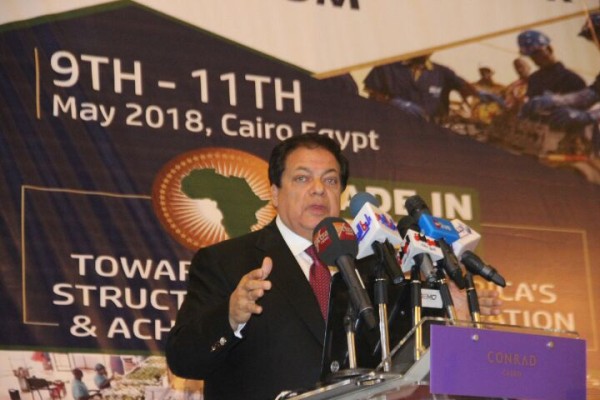